Beginnings: Our Third Decade and Our Third Version of Menlo Innovations

On Saturday, June 12th, we celebrated our 20th birthday as a company. This one felt particularly poignant, not only because of the two-decades milestone. Given the events of the last 16 months around the world, and how they affected our business, this birthday may be the one we really didn't take for granted. Over the last 15 months, we made it through our five-step plan to Thriving Again: Survive. Adapt. Sustain, #EmergeStronger and Thrive Again. It feels so good to be busy again, to be hiring again and to feel optimistic again. Joy.

Normally, we would have had a big party with team members, their families, our friends in the community and our clients (we had a fun one for our 10th anniversary). This time, we had a little party with just a handful of Menlonians. We ventured downtown, took a picture under the marquee of the Michigan Theater, just a couple of doors down Liberty Street from our office, and we hung out for drinks afterward, outside at Knight's Steakhouse for a first team gathering since the pandemic began. It was strange and wonderful to see Menlonians in person for the first time since March of 2020.

The very next week, we kicked off Project Littleton, an internal project at Menlo, to experiment our way back to working in the office again. The project's goal is to target the first week of September as the week we plan to have working-in-the-office the default mode for Menlonians in our area. This 12-week experiment will proactively encourage team experiments to try working in the office again. We will share in the coming weeks how this experiment is proceeding. There are a few of us, so far, who have decided that we will choose to return to the office right away. There are some who are nowhere near ready to make that choice and that's OK. 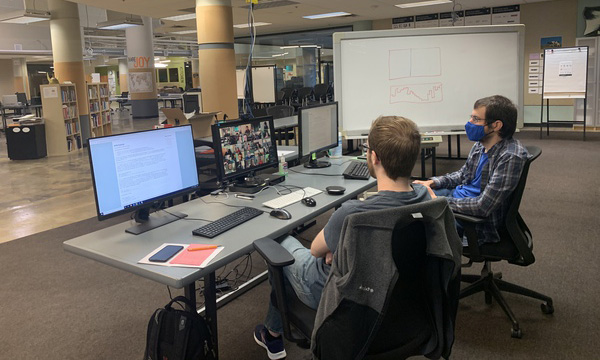 Today, Joe and Ethan came in to pair together. Ethan was excited to be here right away. Joe felt more stress but was willing to participate (anyone can choose to opt out of the experiment if they are not ready). Joe continues to wear a mask, Ethan, offered to Joe that while they are paired, he will also wear a mask. Joe said that's not necessary. They are sharing a computer but are not sharing a keyboard and a mouse. One computer, two screens, two keyboards, two mice. They have one extra computer and screen between them for shared Zoom calls with peers and clients.

I'm as excited as ever about what the next decade will bring for us. Our third decade will begin what I believe will be the third version of Menlo. The first version ran for nearly 19 years as Traditional Menlo, as described in Joy, Inc. The second version has run since March 16th, 2020 and is what I refer to as Pandemic Menlo. I am comfortable saying that I have no idea what exactly the third version will look like. The only thing I know is that it will be different. We've learned a lot of important lessons over the last 15 months, lessons that made us stronger.

I will have a front row seat to see what comes next. I am excited to share our lessons with the world as we have with the first two versions of Menlo.