100 Restless Nights and the Return to Joy: Coping with Our Own Swiss Family Robinson Ordeal (Part 4)

It’s been a full year since I began logging the results of the storm and our crew’s amazing response to it. As with the brunt of the storm’s first landfall, we remain in uncharted waters needing to redefine what normal life looks like. We are receiving news of the ongoing waves and storms hitting local and distant shores. So far, our little island has been spared the worst of the storm’s damage. Our little ship, stranded on the rock just off shore remains a visible reminder of the journey we were once on.

We all thought the storms would have abated by now and there have certainly been bright spots along the way. We have made sturdy boats from the raw materials of our new island home and we’ve actually been able to go out on limited excursions to visit the islands of other stranded travelers. We have learned some of their remarkable techniques for survival. I am happy to report that our small island community is thriving. It’s a different life than we ever could have imagined, and we actively wonder what it will be like to return to the mainland. It’s becoming a faint memory that we keep alive through story telling.

In May, after more than a year of being off the speaking circuit (except virtually), I was scheduled to give a live, in-person talk, on a stage, in front of an audience. It felt as awkward as my first virtual keynote in March of 2020. Wow, this ‘going back’ is going to be harder than I imagined.

By early June, nearly 100% of our team was on their way to being fully vaccinated. We re-opened the office in late June once in-office work was permissible. A few Menlonians were eager to return, others reluctant. Most unsure. The return to the office would in no way be easy or straightforward. There was this psychological sense we’d all developed … that our fellow humans were, by analogy, radioactive, and that the square of the distance meant safety. This safe distance from others was easy to accommodate given our expansive office and the relatively few team members back on any given day. Masks were not mandated but were certainly accepted as normal behavior. No visitors were allowed, and the outside doors still prevented access to our office unless you had an employee badge.

It was quiet. There were headphones as pair partners worked together, one in the office, the other remote. The banter and human energy we were so accustomed to wasn’t there yet. 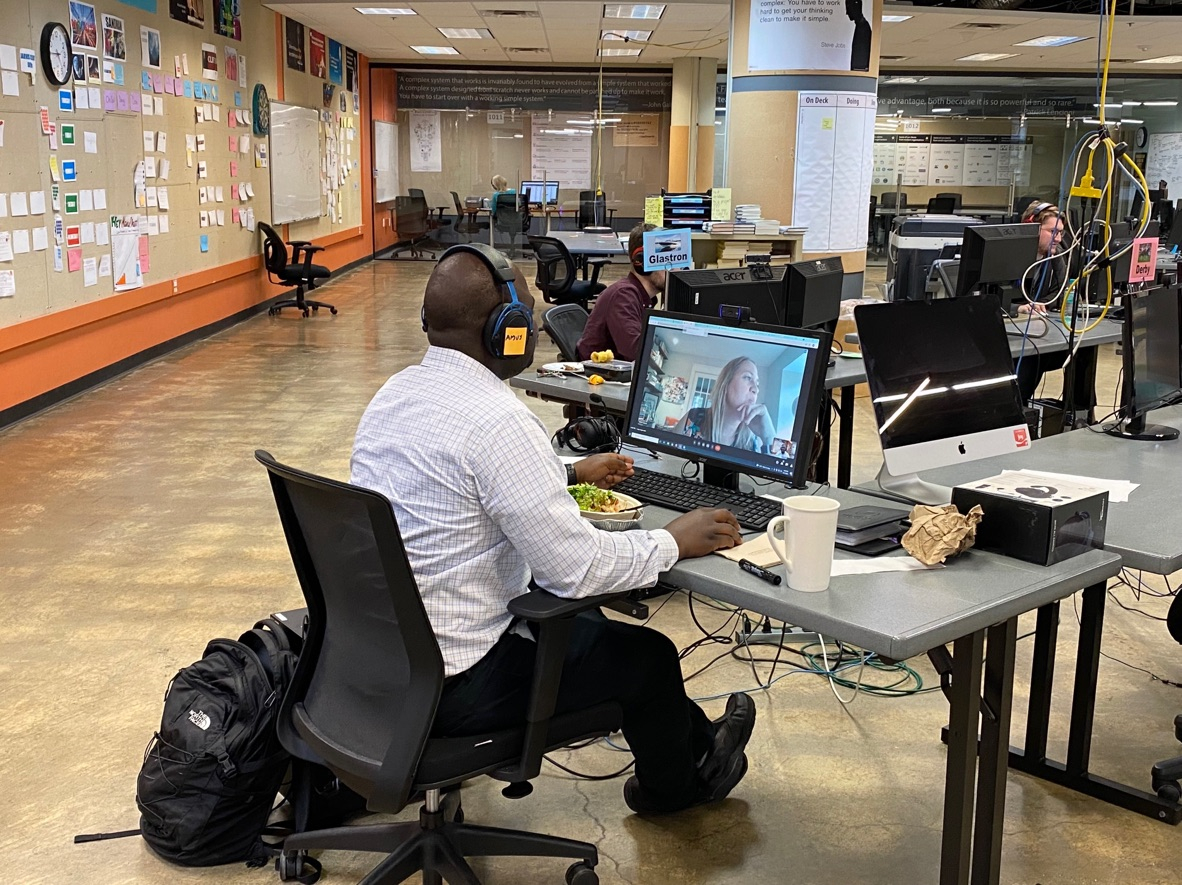 Our daily standups, hybrid now, included a large Zoom screen. It felt as awkward as the first week of the pandemic when we hadn’t fully bugged out yet.

“Will a return to the office ever be in the cards?” I began to wonder.

Life isn’t anywhere near to what we had experienced prior to the storm, but we made it work and work well. We have a thriving community, we are busy with the work of everyday life, and if this is how life has to remain, so be it, I guess. Still, a nagging thought rolls around in my head in my quieter moments:

Should we actually settle for this and accept it? We’ve gotten used to this of course. We have a good life here. Yet, the life we knew, of community, of nations, of neighborhoods and social events was such a big part of all of our lives. We can have much of that here, but not all of it. An attempt to return to the mainland given the ever-present dangers all around us would not make sense, but we also shouldn’t simply assume it will always be this way.

We had a plan.

Between June and September, we would run a series of experiments for returning to the office. The plan was to have the office be the default work location by September 1st. In the months leading up to September 1st we would gradually increase the number of people coming in each day. It would all be voluntary, so no one would feel forced to come back in until they were ready. We also knew that human nature would mean most would not come unless they were asked. Inertia and new habits are powerful forces. Everyone, including me, had their new daily routines worked out. The leadership team would be the first to make this change. I felt just a tinge of melancholy to leave my well-crafted home office that had been my work-from-home location for the last year. It took me about a week before coming into the office felt normal and natural.

At the height of these return-to-office experiments, we had as many as 20 team members back in the Menlo office. For one brief moment, the collective effervescence was present, discernable and delightful. The hybrid arrangement was still a little awkward, but not too bad and we made little improvements each day to adjust. Standup was now fun and jovial again and operating within our expected 13-minute window. It was called by the dart board again! There was a Viking Helmet used by the in-office team. Jenny, one of team members working from home, drew a picture of a Viking helmet on an index card and held it up when it was her turn to speak from Zoom. The laugher and the joy were present and embraced. It felt like good old Menlo again. 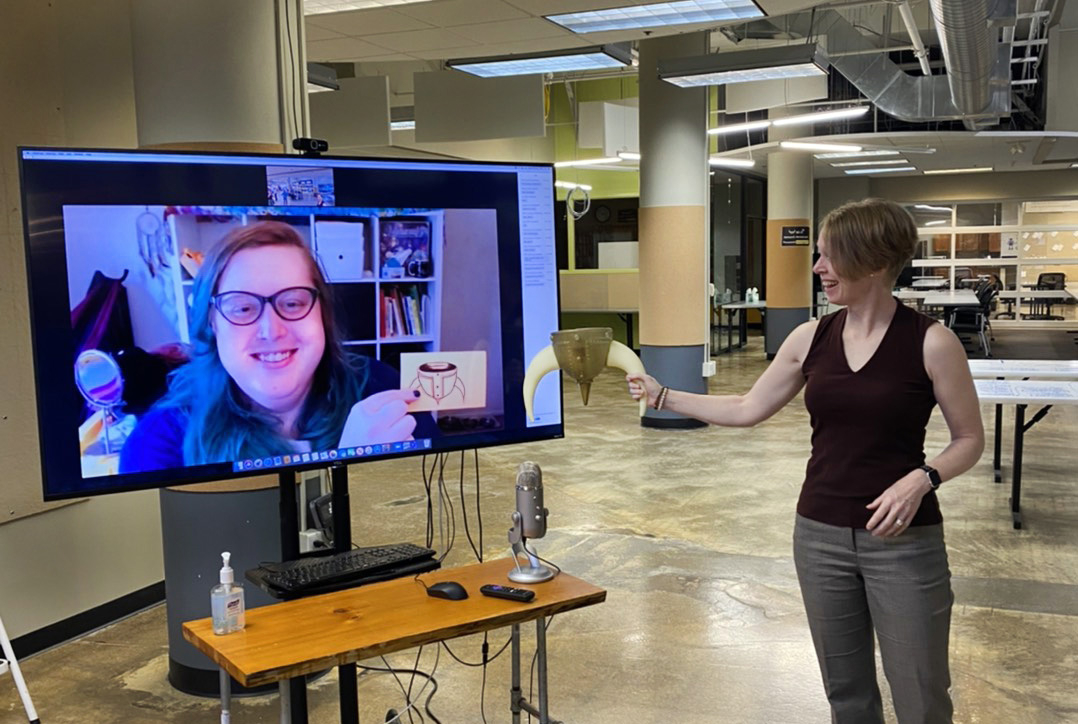 Reports of new storms emerging came from places as far away as India, the U.K., Israel and Iceland. There had been confident predictions that the storms were abating and we had seen the worst of it. Now the dark clouds were once again on the horizon. We were secure in our island home, but we still tightened the lines on everything that kept our little island home safe and stable. The winds started blowing harder, the rains started to come down, the sky darkened. It didn’t feel so unusual this time around because we were used to it and we weren’t as fragile as we had been in our tiny little boat. There was confidence and composure this time. Yet, there was still a feeling of loss. A loss of hope. A loss of a new beginning. One day, we could choose to stay in our island home, but for now the choice was being made for us. ‘You are not going anywhere.’ There were a few visitors who had stopped by to visit and share stories with us and learn from our stories. They, too, had to head back quickly to their own island before the storms became too fierce.

In late July, we did something that had not been done since December of 2019. We held an in-person two-day class at Menlo for twelve guests from a branch of the military. They really wanted to experience Menlo firsthand and we were excited (even if a little anxious) to host them. There was some serious cleaning up and straightening up to do. We had to order food, prepare materials, set up a classroom area and make sure our team was comfortable with outside guests. A couple of Menlonians opted to stay home while there were visitors. Each of us has our own decisions to make about our comfort levels and health concerns.

The class experience was delightful. It felt so good to have people in to visit. In a normal year, we host between 3,000 and 4,000 visitors. From February 2020 to July 2021, the number was zero. (Although our virtual tour guest count has eclipsed 2,000 in that same time frame).

As I said earlier, we had a plan. The Delta variant had a different plan. Our county, which has one of the highest vaccination rates in the state of Michigan just transitioned from “moderate” to “substantial” based on CDC transmission rates. The plan was set aside. The experiments to return stalled. If case counts continue to rise, we will once again close the office to essential personnel only. For now, though, it is quiet again. Only six to eight Menlonians come in each day. Thank God for Andrew’s jovial laughter and the banter that Emily and Carol share. There is still human energy. It is disappointing but not a setback. The business is strong and we are hiring. We know how to do this. There are very few surprises anymore. We are resilient.

That may be the greatest benefit of this time. Not much shocks us anymore. We believe in ourselves more than ever. We know we can handle what nature throws at us.

I know I’d like just a tad more certainty about what comes next. I am OK with not knowing, because I have this wonderful team around me that just figures things out.

And that is joy.

Continued in Beginnings: Our Third Decade and Our Third Version of Menlo Innovations