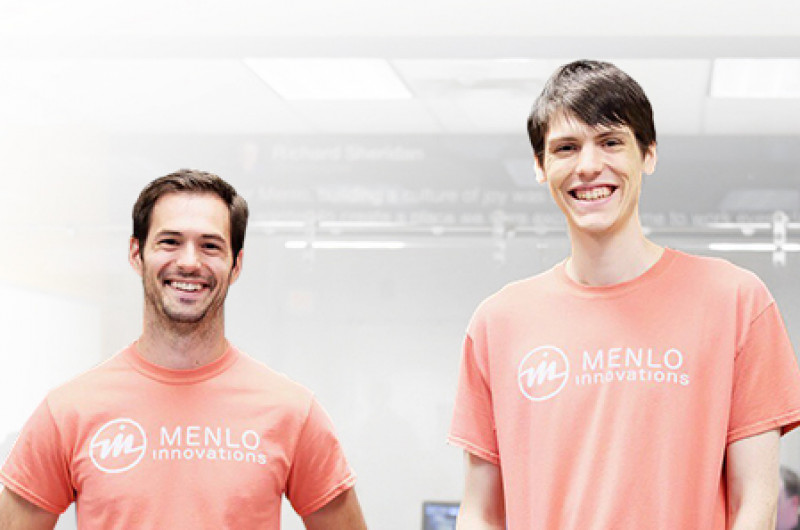 One of the biggest obstacles to spreading tangible joy in our nearly two decades of hosting the tens of thousands of visitors to Menlo Innovations lurks in a simple and often asked question:

"How would THIS scale?"

It’s not always clear what the “this” is in the question. It often revolves around some of our specific practices:

What is clearer in the question is the combination of excitement and admiration for what we’ve created alongside an almost desperate belief that there is no way this could ever work in their own organization. It typically revolves around the fact that our visitors work in an organization that is twice as large, ten times as large, or over a thousand times larger than Menlo. We average around 40 employees.

We have seen stunning examples where joy took off quickly inside of very large organizations such as units of MassMutual, Nationwide and GE who had come into contact with us. If joy can scale inside of some the oldest, largest businesses in history, it can scale for you too. I would offer it might be harder to get to joy in smaller organizations, but that’s for another blog post.

I’d like focus on three key topics:
1. Intentional culture over default culture.
2. Principles over practices.
3. The role of HR in all of this.

Intentional Culture
Every human organization has a culture. Some are explicit and well understood. Many are not. What is lost in many discussions about culture is that you can actually choose your cultural intention.

1. Who did we hire?
2. What behaviors do we tolerate?
3. What attitudes walked in the door today?

An intentional culture is well understood, over-communicated and so present in the practices and systems of the organization, it would be very hard for a hero to change it. The strongest cultures align three perspectives:

If these points are not aligned, the culture is not actually intentional, but simply an aging poster on the wall, and the text of a once-a-year rah-rah speech. Sarcasm, cynicism and disengagement follow. The most obvious disconnect occurs in the annual performance reviews that ask questions that are not aligned with the oft-repeated cultural intentions.

Principles OVER Practices
I relearned this lesson in the moment the COVID-19 pandemic put all Menlonians in a work-from-home environment suddenly, instantly, and without compromise. As the guy who has spent the last 19 years speaking about how our practices intertwine with our culture, wrote two books on the subject and spoken at conferences around the world about the joy at Menlo, I instantly fell into a deeply worrisome state about whether we could weather this storm.

The team adjusted in days. It took me weeks.

My key takeaway during this time should have been obvious all along: If you want to pull through tough times, build the strong foundation of an intentionally joyful culture that everyone believes in and wishes to maintain.

The Role of HR in All of This
One of the biggest laugh lines I get at the conference keynotes I deliver centers on a story I tell about one of grandest, longest running experiments at Menlo: the Menlo babies. Our tradition for the last 13 years is to invite newborns into the office (not daycare, the baby is with the parent) all day, every day, for months.

The first Menlo baby came to work when one of our team members was trying to get back to work after maternity leave and there were no viable daycare options. The mom had told me how excited she was to rejoin the team but had not yet solved the daycare issue. I listened and offered her a crazy idea.

In my talks, I describe this moment as a screaming match in my head, that the mom never heard, with a dark voice on one shoulder and a bright voice on the other.

“Don’t you dare say what you are about to say, the lawyers will freak out, the insurance policies will go through the roof. HR will kill you!”

“It’s your company, you can do whatever you want. You don’t even have an HR department!”

A roar of laughter and applause happens every time. Even at HR conferences!

I then back up and stick up for HR by saying, HR people have been my best support in achieving the joy I have achieved in my career. I do not believe ANYONE ever got into HR wanting to torture people with forms and bureaucracy and focus their time on compliance over culture. HR people chose this career path because they want to focus on the humans (the H in HR).

As in my recent post about Megatrends author John Naisbitt:

"The most exciting breakthroughs of the 21st century will not occur because of
technology but because of an expanding concept of what it means to be human."

In your pursuit on an intentionally joyful culture, you must review (and likely change) EVERY aspect of your HR lifecycle:

If your stated cultural intentions are not explicitly and obviously present in every one of these traditional HR practices, your culture change initiatives will struggle and will likely fail no matter the size of the organization. HR should be a great partner on a journey to culture change and it will bring them joy by making them a part of the team!

Organization versus Company
One last important thought: I carefully chose to use the word organization instead of company. This organizational approach is key to scaling. You don’t have to change the world; you just have to change YOUR world. Large companies that span nations and have thousands or hundreds of thousands of employees will never change ‘all at once’. And that’s OK. All of the examples I’ve seen where joy was successful inside of a large company involved an internal organization within a much larger company … the claims department of MassMutual, the IT team at Nationwide, a Global Services team within GE. However, on one visit of GE’s then CEO Jeff Immelt, he said “I’m not sure exactly what is going on here, but I want more of it.” And that’s how you get culture to scale:

Create an example and let others come see it. That’s exactly what we do at Menlo! :)

I hope to see you on a future tour.